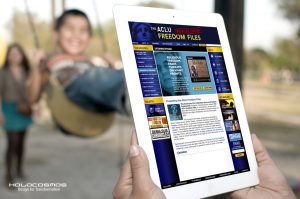 The ACLU has played a major role in nearly every critical civil liberties battle of the last century. Their mission to defend the rights of all citizens as enshrined in the Bill of Rights aligns with the primary core values of ResonantBrand. In recent years, as the current administration has been relentless on their assault of privacy rights though the “Patriot Act” and President’s illegal NSA spying, the work of the ACLU has become paramount.

The ACLU and award-winning producer/director Robert Greenwald’s Brave New Films’ unprecedented new series entitled The ACLU Freedom Files – with social media design by ResonantBrand and engineering by our good friends who brought us into the project, strategic partner and client CivicActions. In ten 30-minute episodes, the series creators explore pressing issues that are threatening the civil liberties of all Americans, regardless of political affiliation. The show will reach millions of viewers via satellite network Link TV, on college campuses across the country on Zilo TV, and via new media, technology and grassroots networks such as video blogs, podcasts, streaming video, viewing parties, screenings and more

Protecting the Constitution on the Small Screen and the Even Smaller Screen , our team found a way to quickly redesign the ACLU.TV site to make it pop, hold the ACLU brand, and deliver instant flash previews for streamed and downloaded video of the acclaimed ACLU Freedome Files TV Series on-demand, made available to 80 million homes on CourtTV alone.